High-intensity focused ultrasound (HIFU) is a relatively new cosmetic treatment for skin tightening that some consider a noninvasive and painless replacement for face lifts. It uses ultrasound energy to encourage the production of collagen, which results in firmer skin.

HIFU is most widely known for its use in treating tumors. The first reported use of HIFU for aesthetic use was in 2008.

HIFU was then approved by the Food and Drug Administration (FDA) in 2009 for brow lifts. The device was also cleared by the FDA in 2014 to improve lines and wrinkles of the upper chest and neckline (décolletage).

Several small clinical trials have found HIFU to be safe and effective for facial lifting and refining wrinkles. People were able to see results in a few months after treatment, without the risks associated with surgery.

While the procedure is also used for overall facial rejuvenation, lifting, tightening, and body contouring, these are considered “off-label” uses for HIFU, meaning the FDA has yet to approve HIFU for these purposes.

More evidence will be needed to find out who is best suited for this type of procedure. So far, HIFU has been found to be a promising treatment that could replace face lifts, especially in younger people who don’t want the risks and recovery time associated with surgery. 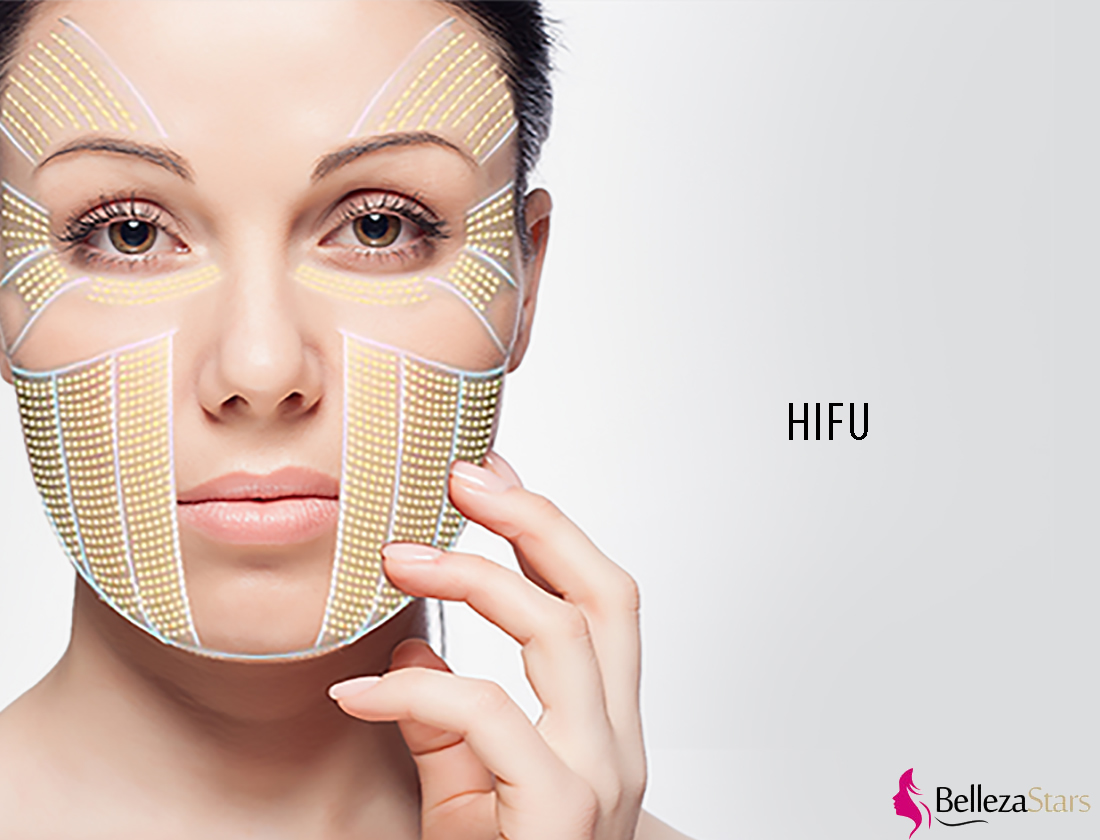 Once the cells in the targeted area reach a certain temperature, they experience cellular damage. While this may seem counterintuitive, the damage actually stimulates the cells to produce more collagen — a protein that provides structure to the skin.

The increase in collagen results in tighter, firmer skin with fewer wrinkles. Since the high-frequency ultrasound beams are focused on a specific tissue site below the skin’s surface, there’s no damage to the upper layers of the skin and adjacent issue.

HIFU may not be appropriate for everyone. In general, the procedure works best on people older than 30 with mild-to-moderate skin laxity.

People with photodamaged skin or a high degree of loose skin may need several treatments before seeing results.

HIFU isn’t recommended for people with infections and open skin lesions at the target area, severe or cystic acne, and metallic implants in the treatment area.

According to the American Society for Aesthetic Plastic Surgery (ASAPS), HIFU and other nonsurgical alternatives to facelifts have seen a major increase in popularity over the last few years. The total number of procedures performed has increased 64.8 percent between 2012 and 2017.

HIFU has many aesthetic benefits, including:

In a larger study of 93 people, 66 percent of those treated with HIFU perceived an improvement in the appearance of their face and neck after 90 days.

While HIFU carries far fewer risks and costs than a surgical face lift, results may not last as long and repeated procedures may be needed. Here’s a summary of the major differences between each procedure:

According to ASAPS, the average cost for a nonsurgical skin tightening procedure in 2017 was $1,707. This is a drastic difference from a surgical facelift procedure, which carried an average cost of $7,562.

Ultimately, the cost will depend the area being treated and your geographic location, as well as the total number of sessions needed to achieve the desired results.

You should contact an HIFU provider in your area for an estimate. HIFU won’t be covered by your health insurance.

You may experience slight discomfort during an HIFU procedure. Some people describe it as tiny electric pulses or a light prickly sensation.

If you’re worried about pain, your doctor may suggest taking acetaminophen (Tylenol) or a nonsteroidal anti-inflammatory drug (NSAID), such as ibuprofen (Advil), prior to treatment.

Immediately after the treatment, you may experience mild redness or swelling, which will gradually recede over the next few hours.

There’s no special preparation needed before having an HIFU procedure. You should remove all makeup and skin care products from the target area before treatment.

Here’s what to expect at your appointment:

While the ultrasound energy is being applied, you might feel heat and tingling. You can take a pain medication if it’s bothersome.

You’re free to go home and resume your normal daily activities right away after the procedure.

HIFU treatment for face side effects

HIFU is considered very safe if performed by a trained and qualified professional.

The best part about this treatment is that you’re able to resume your normal activities immediately after you leave the provider’s office. Some slight redness or swelling may occur, but it should subside quickly. A light tingling sensation of the treated area may persist for a few weeks.

Rarely, you may experience temporary numbness or bruising, but these side effects usually go away after a few days.

The before and after – takeaway

HIFU is considered a safe, effective, and noninvasive procedure for tightening the facial skin.

Its advantages over a surgical face lift are hard to deny. There are no incisions, no scarring, and no required rest or recovery time. HIFU is also far less expensive than a face lift.

If you’re looking for a treatment that is quick, painless, and noninvasive, HIFU is an excellent option compared to a surgical face lift.

Of course, HIFU isn’t a miracle cure for aging. The procedure is best suited for patients with mild-to-moderate skin laxity, and you may need to have the procedure repeated in one to two years as the natural aging process takes over.

If you’re older with more severe skin sagging and wrinkles, HIFU may not be able to eliminate these skin issues.